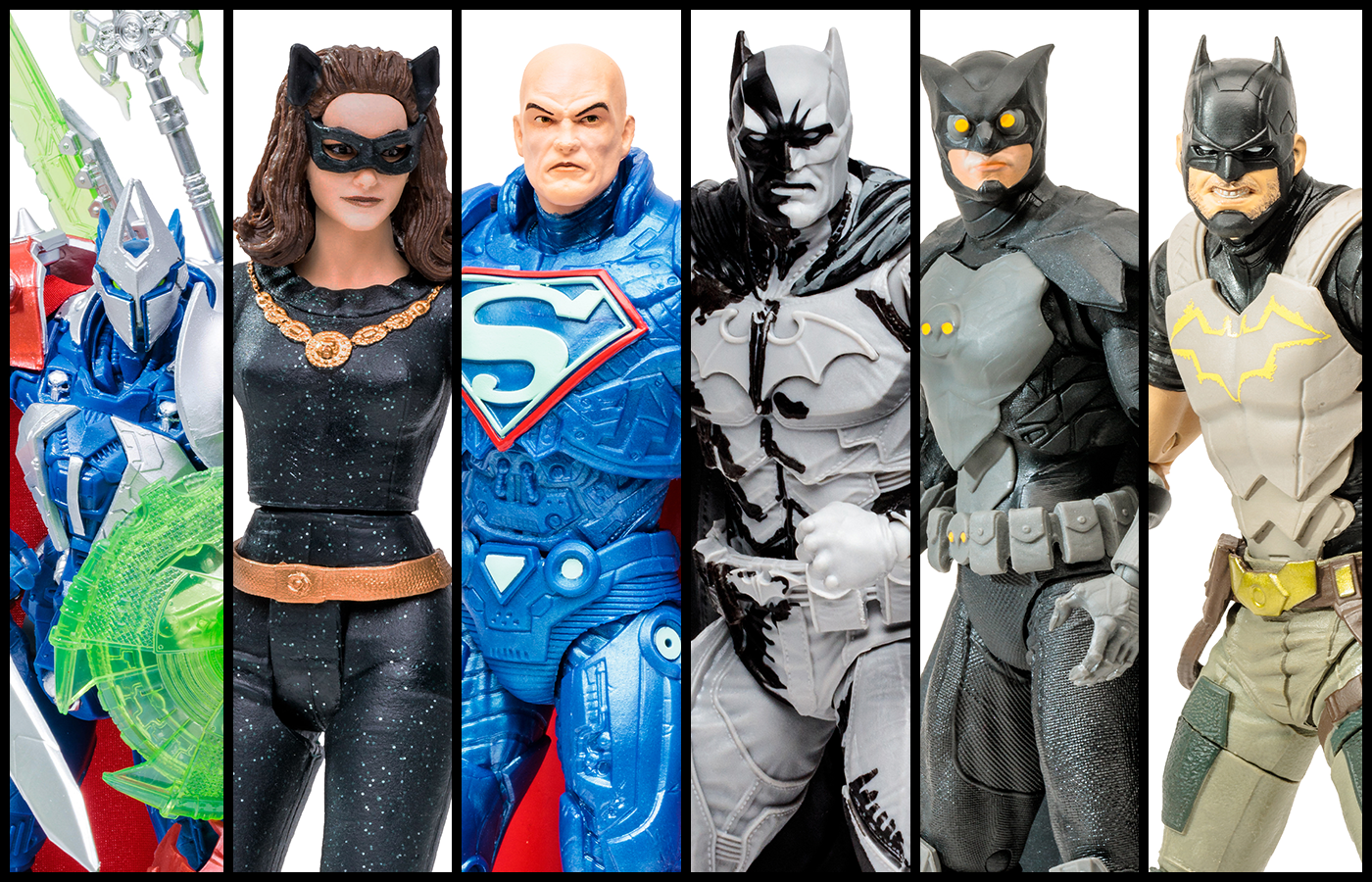 First of all, I need to get this off my chest: I told you, guys! :p

By now, it should be very obvious that unless it sounds too good to be true, the leaks we get from Asia are 99% accurate when it comes to new releases from McFarlane Toys. We’ve known about every single one of these “new announcements” for quite a bit, and today we can confirm that just like last year, the SDCC exclusives are actually part of Target’s Summer Geek-Out.

There’s a lot to digest, so let’s just jump into each of them:

The first true variant in this new line (the 7 inches one, rather than its smaller, 3″ counterpart) we’re getting a black and white version of both Batman and the cover art of the comic, we need to wait and see if the inner art will all be B&W too). I can imagine that the intention of this was to imitate DC Collectibles BlueLine… and then fail miserably at it. The paintwork is odd and lazy, and not completely accurate on what true line art looks like from page to 3D (again, DCC just did it better).

I have to be honest, I know it’s probably a thing with licenses to make the comic bundle happen; but I’m just seeing more McFarlane Toys figures here with different packaging, rather than the collector-grade quality that the old DC Direct was known for. There should be a distinction between both lines moving forward, going further than just the box and logo.

If somebody doubted that Owlman was going to be one of the 4 figures for this wave, they haven’t been paying attention to the last 2 years of releases. With this release, Thomas Wayne Jr. is a pretty accurate representation of what we’ve seen in 2021 Crime Syndicate’s comic, with some nitpicks here and there that don’t take much from the overall enjoyment of the figure. He comes with another baby Starro and puts us one step closer to completing the big Conqueror!

For the fourth release, my money is still on Emerald Knight, screenshot this to rub it on my face if I’m wrong when the announcement is made.

There’s not much to add here. He may look like a lazy variant, but it’s actually a valid and accurate representation from the comics, where he was seen with and without his coat. A lot of collectors had actually gone and jump ahead of McFarlane and removed the coat to make this look, but this is a nice addition to those who like both versions, but don’t like to mess with their figures.

Finally, we get a word from him. Leaked a long time ago on the back of the boxes themselves, we’re getting his Power Suit looks from the regular DC Rebirth era. It also seems he has been waiting his moment to come out of the warehouses since his box sports the older back panel look that has been replaced by the bigger card art the more recent figures have.

From the pictures, the figure seems to be an almost exact copy of the previous Eartha Kitt release, but this time using the likeness of season 1 Catwoman: Julie Newmar, and let me tell you… the Retro line continues to impress with its head sculpts, it definitely looks like her.

With the confirmation on this previously leaked figure, we know that there’s a lot of fun stuff coming up for this line.

The children of the Toddfather keep on coming! First seen on the Spawn Series 9 from ’97, this new version of Manga Spawn is just massive!

With a brand new design and a ton of accessories, the only downside to this release is its apparent very limited range of articulation (from what we saw on Todd’s video), however is a worth addition to any Spawn collection, to sit next to the vintage, very different previous version.

Similar to what happened to Year 2 Batman, you can get two versions of him, the regular one, or a Designer Edition with a signed nameplate from the hand and writing of Todd McFarlane.

None of these have a proper release date yet, but we bet you can expect them to come out before the end of the Summer. Which ones are you grabbing this time?