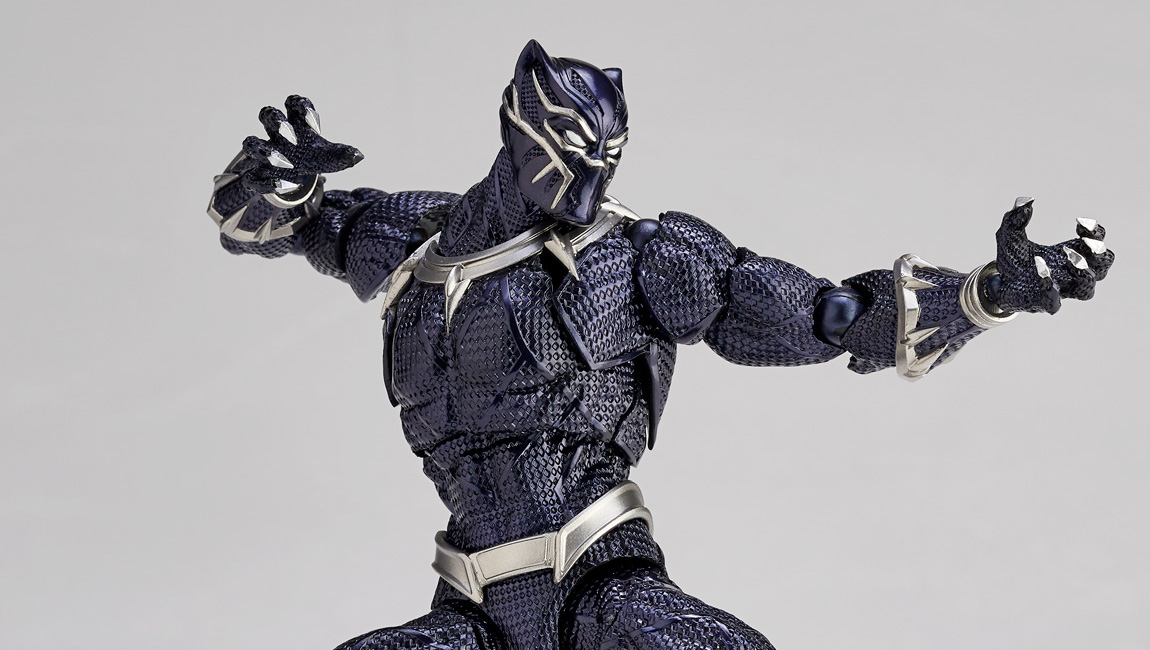 Kaiyodo has released solicitation information for their upcoming Yamaguchi Black Panther action figure. This figure is loaded with articulation and accessories! Enough so, that it would make its Marvel Legends counterpart blush! Check out all the details including an image gallery of the prototypes below!

Express the power of armor with shock wave effect parts!

The armor suit woven with vibranium has a high-tech material-like detail all over the body in addition to the expression of the trained body, and the metallic paint finishes it in a jet black that blends into the darkness of the night.

The movable gimmick of the whole body is tuned with a focus on supple and powerful action befitting the name of black panther. Not only the range of movement of each joint is wide, but also the elbows and knees that do not break the outline connection even when bent deeply, the arm swing by the swing movement of the divided torso side, and the unique joints built into the shin Action poses that incorporate even the deformations unique to comics, such as the “bending” of the human body, are possible. Please enjoy the acrobatic battle with the best movement and modeling !!

A wealth of effect parts are included to express the intense attack created by the body and suit reinforced by mysterious herbs. Enliven the image of a human bullet battle with the punch effect attached to the fist, the shock wave effect that can be used in combination, and the slashing effect with the claws.

The shock wave effect can be used to express the impact of landing on the ground by placing it at your feet if you connect it in a circle. Furthermore, by standing on the attached small base, it becomes a shock wave attack that releases the energy stored in the suit from the whole body. The highlight is the effect itself, which expresses the atmosphere of a comic in three dimensions with simple yet expressive lines!

T’Challa, who has been training since childhood as a successor to the throne, is a master who is good at handling all kinds of weapons in addition to martial arts. Comes with a classic design spear, you can incorporate his personality as a hero with a traditional African culture into his action poses.

* The images shown are samples at the time of development and may differ slightly from the actual product. Please note.