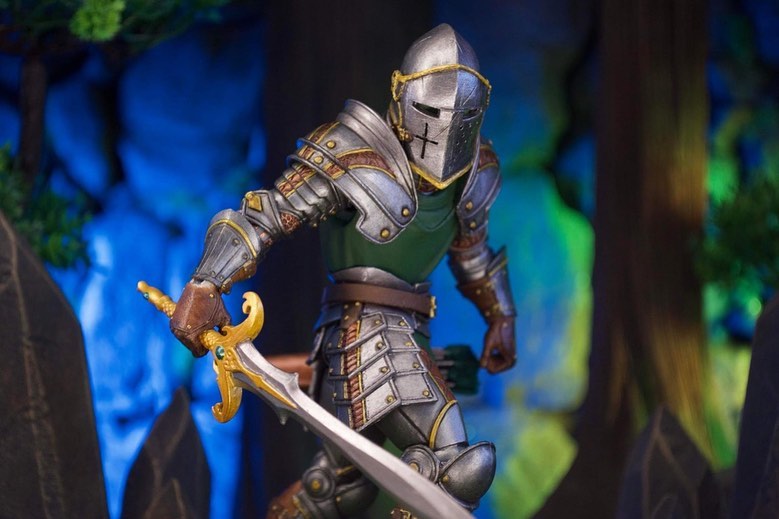 On Saturday Four Horsemen Studios collaborated with d_amazing on YouTube for the next reveal in Mythic Legions: All Stars 5+:  The Xylernian Guard.  Today they have followed up with images from the reveal and review.  In these images we get a good look at the new heads and shield for this All Star.  Here is the official word straight from the (four) horsemen’s mouth:

The head is the same sculpture on each, but it comes painted in two distinct styles to showcase a few of the Fae sub-races that make up the Xylernian Guard. The flip-up visor attaches separately, and you get two different visors with this figure so you can add some diversity to your Xylernian Guard! Of course, no Xylernian Guard would be caught without the symbol of their station – their golden shield bearing the visage of the elder frost deer herself, Xylona.

One thing to note – even thought this figure uses brand new parts that have never been offered in the line before, these parts are already fully tooled and ready to go! We created these some time ago, so Mythic Legions: All Stars 5+ is the best of both worlds – fans will get brand new parts but without needing to wait the normal timeframe for those parts to be tooled! This is just one more reason why we have named this very special wave All Stars 5- PLUS!!!

This looks and sounds very cool, and I think you’ll agree after checking out the photo gallery below.  With the various head sculpts included it will be very tempting to buy a few of this release.  Mythic Legions All Stars  5+ preorders begin on July 29 at noon EST on Store Horsemen but between now and then be on the lookout for even more reveals for this plus sized wave.