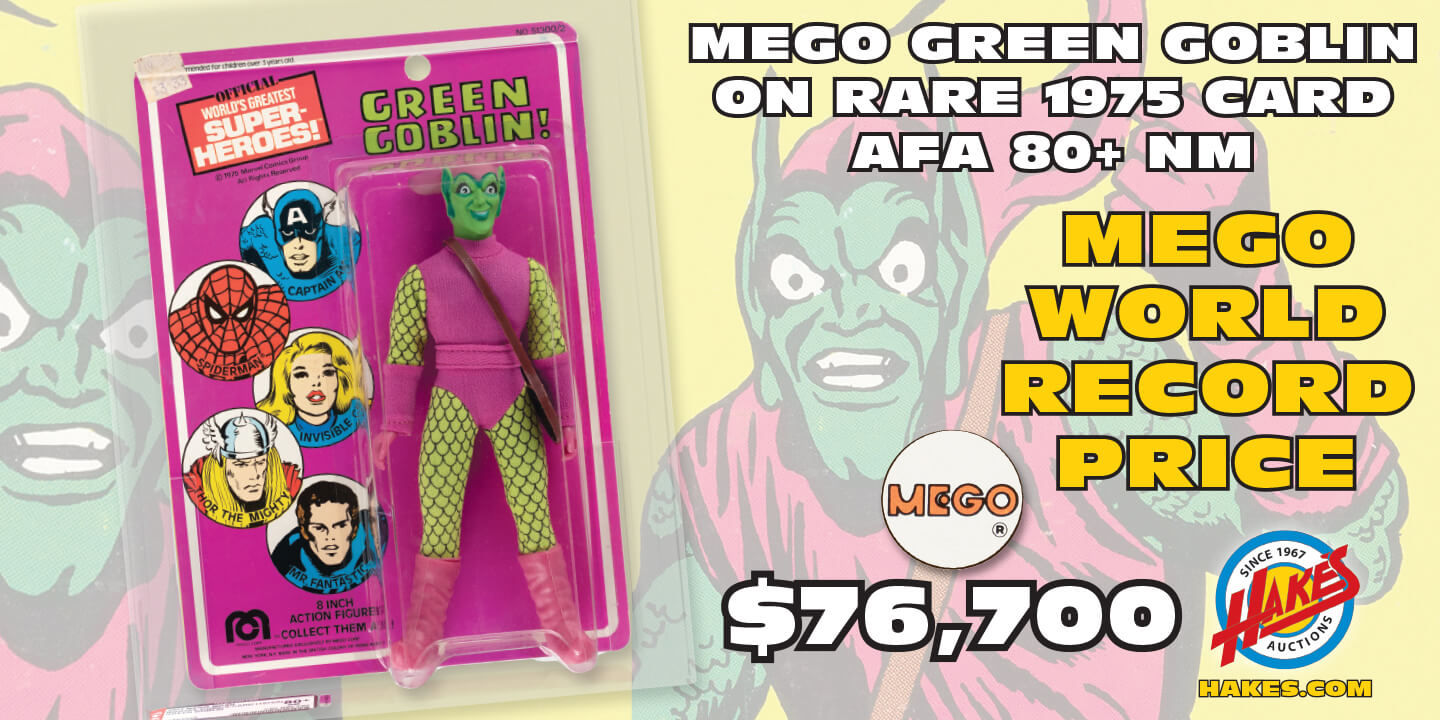 A few days ago, a sale at Hake’s Auctions set a world record for a Mego action figure, with the sale of an AFA-graded Green Goblin on card. The 70’s action figure brought in $76,700, it went for far more than originally estimated ($10,000 – $20,000), a testament to the enduring popularity of the Mego World’s Greatest Superheroes line.

One of only two Marvel villains released in the Mego line, the Green Goblin debuted in 1975 and was commonly found in a window box. The carded series of figures only included him in the first assortment, making a Green Goblin on card the most difficult to find of all the Marvel characters.

The record-setting figure received an 80+ grade from the Action Figure Authority (AFA), even rarer for the almost 50-year-old toy. While not a record-breaker, a carded Mego figure of lesser Spider-foe the Lizard (graded 75+) went for $7,139 in the same auction.

“Vintage Mego figures are great items to get graded,” said Action Figure Authority president Chad Thompson. “With all of the packaging and costume variations, there are varying degrees of rarity, and completist collectors are always on the hunt for the next version of their favorite character. If you’re looking to sell, there’s someone looking to buy, and having an official grade can increase a vintage item’s value greatly.”

“Graded action figures – especially Megos – always do well for us,” said Hake’s Auctions president Alex Winter. “Add in a popular character – and a rare packaging variation – and it’s a perfect storm of factors that add up to a high-dollar item. We always recommend getting a toy third-party-graded before we bring it to auction – that way the buyer knows exactly what they’re getting.”

Hake’s Auctions was founded in 1967 by Ted Hake, and purchased in 2004 by Geppi Family Enterprises. Hake’s deals in collectibles and historical artifacts, including political items, sports memorabilia, coins, autographs, and especially collectibles relating to pop culture, such as comics, toys, posters, props and original artwork. They have set world record prices in hundreds of categories over the last six decades, and have held over 200 highly successful auctions to date. For more information visit hakes.com.