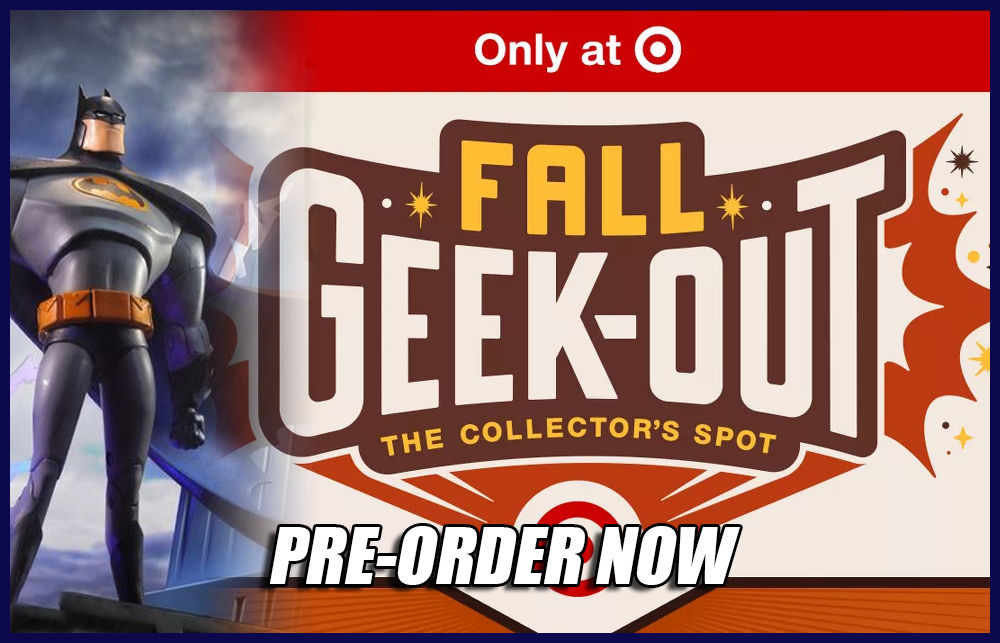 In what seems like a tradition by now, Todd McFarlane has started Target’s Geek Out with a new set of exclusives… using the term “new” in the loses sense of the word, given that these are all previously seen figures with some new bling and repackage, and are being labeled as New York Comic Con exclusives, like previous years as well. Let’s take a look at them and pre-order what you love! The most baffling choice here is moving the label from McFarlane Toys DC Multiverse to a DC Direct release; it could be licensing, or a business decision… but it seems rather unnecessary without a proper reason.

Other than the clear addition of the special base and the chance to get a signed card by the BTAS mastermind, Bruce Timm, this figure’s main distinction is the cape, which is a new mold with this floating in the air version; then, of course, the paint application mimicking the cell shading from the show (which was tried and done in the last days of DCC/DCD before McFarlane took over). Although the lighting of these pictures is different, we could argue that the grey part of the suit is a lighter tone as well in this “re-release”. This one leaked a few days ago, and it’s one of those fun silly things that can only come from the Retro side of Batman’s lore. We’ve seen Alfred having to don the cowl numerous times, in order to keep Bruce’s identity safe when somebody put two plus two together and asked why they were never seen at the same time.

Other than the slightly darker colors (again, this could all be different lighting with all the pictures to come), the only change from the original release is the head sculpt, using the likeness of the iconic Alan Napier. The icing on the cake here is definitely that cool metallic lunchbox used as packaging, but this is probably the release that had more work to justify buying the same stuff twice.

Onto the figures themselves (left for the new ones, right for the originals): Batman is sporting a darker paint app (no doubt here), especially the blue parts replaced by a navy blue that goes much better with the white eye slits. Robin comes with toned-down colors too, and his own set of white eyes. Definitely less goofy, more swaggy. Joker has a complete new coat of paint here, going for the more classic, darker purple and green, with even some extra work done on the hair. Finally, Penguin is the one that has less work, with a change of color on his bowtie and hat, and nothing else. So, with all this in mind, tell us which figures you’re going to pick this time, in the comments down below.

One thought on “Pre-Order: Target’s Fall Geek Out is Live with New McFarlane Toys and DC Direct Exclusives”