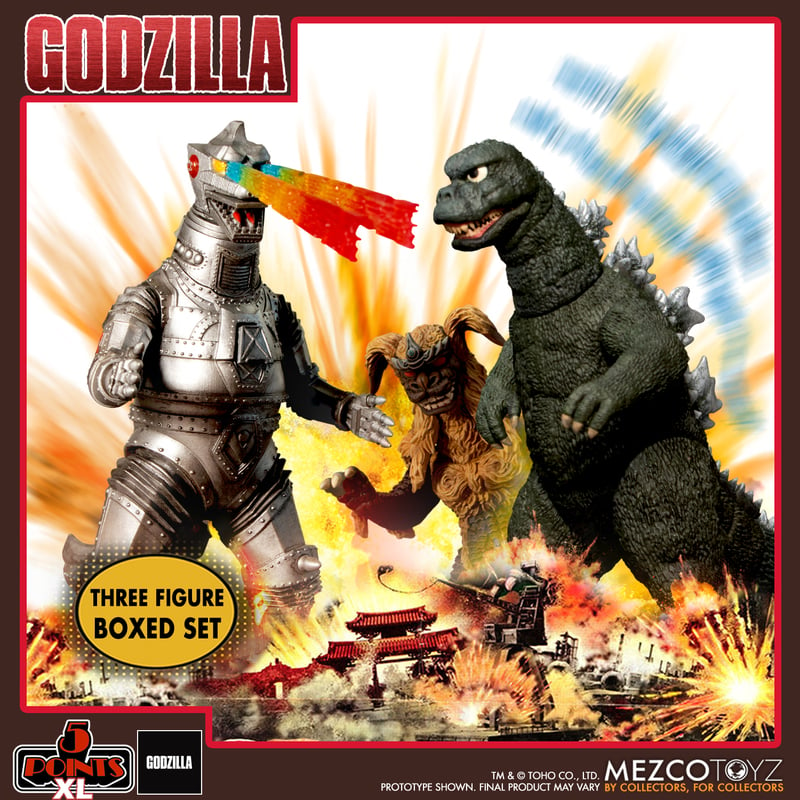 Mezco has another Godzilla 5 Points box set on the way, this time based on 1974’s Godzilla Vs Mechagodzilla.  Previous Godzilla 5 Points sets include 1971’s Godzilla Vs Hedorah, 1964’s Mothra Vs Godzilla, and two Destroy all Monsters box sets.  Needless to say, this line is growing fast.  If you are unfamiliar with Mezco’s 5 Points lines, they all have basic 5 points of articulation with more attention given to sculpting and accessories.

5 Points XL – a colossal addition to our nostalgic 5 Points line with the same fan-fueled fun, but bigger! …It’s a little bit of a big deal.

Intent on taking over the planet and stopping Godzilla should he interfere, aliens build a mechanical version of the King of the Monsters. Realizing Mechagodzilla may be too strong to take on alone, humanity summons the legendary King Caesar to assist Godzilla in battle.

This beastly box of behemoths can barely contain Godzilla, Mechagodzilla, and King Caesar – all with interchangeable head portraits and their own unique accessories!

5 Points XL Godzilla vs Mechagodzilla (1974) Three Figure Boxed Set is packaged in a collector-friendly box, designed with collectors in mind.